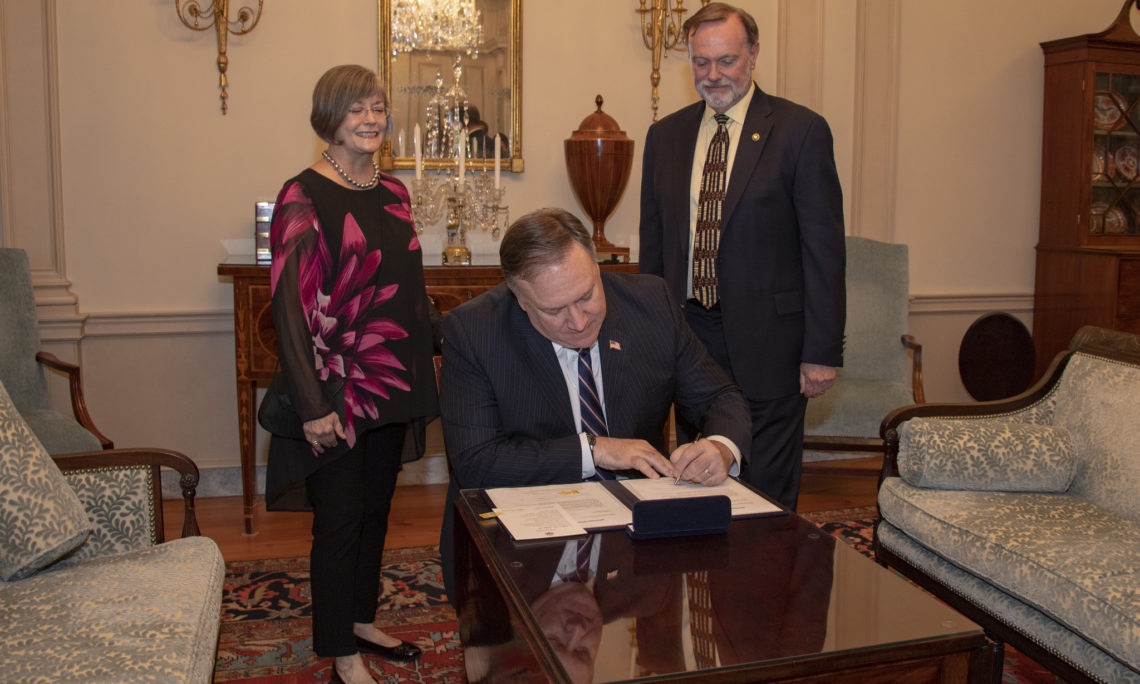 I am grateful for the many friends, family, and colleagues who are here today – literally from around the nation and the world.

And I greatly appreciate the Secretary highlighting the role played by Jane – my wife, partner and best friend for 47 years – without whom I could never have made it through the ranks — she is actually the best diplomat in our family.

A special thanks to the African Ambassadors with whose countries I very much hope the US can strengthen relations even further during my tenure as Assistant Secretary – as well as to other ambassadorial friends who are in Washington so ably representing their nations.

Another special thanks must go to former Assistant Secretaries, who so capably managed this portfolio – I am counting on being able to occasionally tap your wisdom and experience during my tenure.

I must especially thank Ambassador Linda Thomas Greenfield – whom I am merely following, since she cannot be replaced – and who played a major role in building my enthusiasm for this position. And of course Ambassador Don Yamamoto who so ably led the bureau during the 18 month gap.

I am deeply humbled that the President and Secretary Pompeo are entrusting me with the honor of leading the Bureau of African Affairs, and serving as their representative to Africa at this most crucial time in the Continent’s history.

Africa truly is at a crossroads, and the direction it takes will have a major impact – for good or ill – not only on that continent but the rest of the world.

Everyone who follows events in Africa knows that a demographic tsunami is coming between now and 2050 – when the Continent will double its population to over 2 billion.

And these millions and millions of young people will have exactly the same aspirations – thanks to modern technology – as young people elsewhere in the world.

Africa’s leaders understand that their most critical role is to create meaningful jobs for their youth.

Ethiopian Prime Minister Meles, a thoughtful visionary told me during our last meeting back in 2003, “If we don’t give these young people jobs, they will wash away our governments.”

The importance of this point was so well articulated by President Kenyatta during his recent visit to Washington, when he enthusiastically invited the American business community to invest in Kenya – because he and other enlightened African leaders know that US businesses bring with them high quality products and services which create employment opportunities — and not debt.

Of course, unlike some other countries, with their State controlled enterprises, the U.S. government cannot simply order American businesses to invest in Africa.

So it is African governments that must provide the type of environments that attract serious business investments — which will create jobs and not simply extract commodities.

Building this type of environment means providing a stable and open political space, corruption free institutions and processes, fair and equal treatment of all investors, and most importantly, developing each nation’s greatest resource – its own people – by providing all of them with the universal rights, freedoms, and opportunities endowed by our Creator.

Those who know me well, know of my deep love for Africa and Africans. During whatever time I have as Assistant Secretary I promise to work enthusiastically to find ways to support those countries which seek to better the lives of their own people – whether in partnership with USAID Administrator Mark Green – another great friend of Africa – whose “journey to self-reliance” is exactly the type of partnership program the developing world needs; or by helping recruit US businesses to invest in Africa.

And there is another American sector which can play a crucial role in helping develop Africa’s human resources which I’d like to mention – U.S. higher education (and there are a number of U.S. universities represented here today). America’s universities are the world’s best, and they are eager to collaborate with your countries’ educational institutions in ways which will greatly benefit everyone.

Distinguished ladies and gentlemen, let me close by emphasizing that the United States of America cares greatly about Africa, its future, and our engagement with the nations of the Continent.

This was reinforced to me during my preparatory meetings for this position with all branches of our Government, and my subsequent discussions with the Secretary and other high-level officials.

I can assure you that if I had any hesitation on this matter I would not be standing here before you.

As we go forward I ask for your continued prayers and support, not so much for my success – but for Africa’s success in taking the road which leads to peace, stability and prosperity – now and for its future generations.

And I ask each of you to look at Africa a new way – through the windshield, and not the rearview mirror – as a continent of promise and opportunity; not problems.