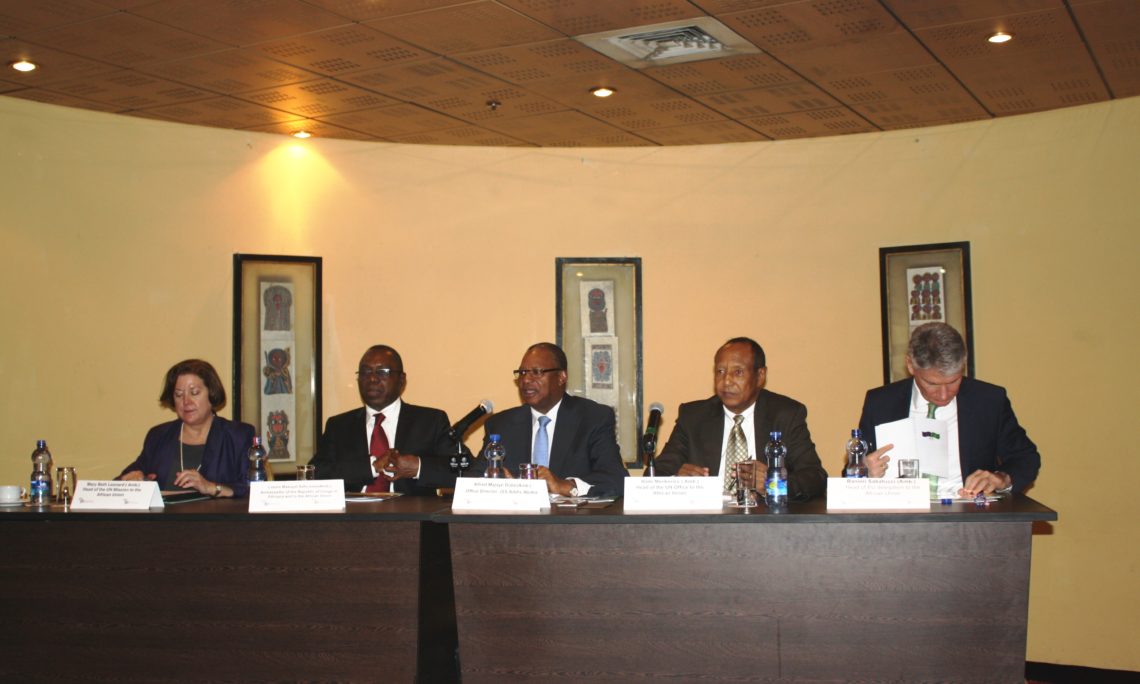 Ambassador Mary Beth Leonard, the U.S. Ambassador to the African Union addressed an audience made up of participants from the diplomatic corps, international organizations, and think tanks based in Addis Ababa, on the United States partnership with the African Union, highlighting shared priorities in the area of peace and security.  Ambassador Leonard discussed in detail the United States policy objectives in Sub-Saharan Africa and praised the AU for its continued efforts to mainstream youth engagement, member state commitments to end child marriage, and advancements toward gender equality in Africa.  The Institute of Security Studies (ISS) organized the seminar ahead of the AU Summit, providing an opportunity for international partners to  discuss the upcoming AU summit and key objectives.

It is my distinct honor to be here today to offer my thoughts on the United States’ partnership with the African Union ahead of this year’s AU Summit.

I would like to thank the Institute for Security Studies for today’s invitation.  I commend the important work ISS is doing as a champion of thoughts and ideas and for providing a critical analytical voice to the most challenging peace and security problems in Africa.

The AU Summit provides an opportunity for reflection on the most pressing challenges facing the continent and for African leaders to take stock on how AU Member States with diverse challenges can work together to bolster peace, further economic progress, and spur development.

I look forward to discussing today some general thoughts on the U.S. relationship with the African Union by focusing on key areas of strategic importance, our shared priorities in peace and security, and the U.S. support for AU reform.

I would like to note that there is great consonance on how the United States views specific developments in Africa, notably with several key partners here today.  The views expressed reflect a general perspective and highlight some but not all of the ways in which the United States support the African Union and AU Member States to address, resolve, and prevent emerging conflict.

Over the past year, we have witnessed several positive developments, particularly with the number of successful democratic elections across Africa, member state commitments to end child marriage, and advancements toward gender equality.  Despite these successes, the United States remains concerned over the humanitarian crisis in South Sudan and the political stalemate in Democratic Republic of Congo.  If these conflicts are not adequately addressed, the entire region is threatened.

The African Union is key to resolving these conflicts and restoring peace.  As Ambassador Haley, U.S. Permanent Representative to the United Nations, noted most recently, the African Union has a unique capacity to anticipate crises, mediate conflicts, and deploy troops and police on short notice.  When crises occur, African Union-backed military and police forces, as well as those of regional economic communities and other sub-regional groupings, have been the first responders.

Because of the commitment of AMISOM, for example, al-Shabaab controls less territory and the Somali government is growing stronger.  In Central Africa, the AU-led Regional Task Force continues to degrade the Lord’s Resistance Army.  In the Lake Chad Basin, forces from several nations — with the backing of the AU — are fighting to end Boko Haram’s senseless brutality.

South Sudan continues to face converging economic, political, security, and humanitarian crises on a staggering scale.  Five and a half million people are expected to face life-threatening hunger during 2017, and more than three million people have been displaced since civil war broke out in December 2013, including 1.5 million refugees.  In February 2017, the UN declared famine conditions in two counties in Unity State, affecting 100,000 people.

Further instability and refugee outflows would wreak havoc on the region.

The South Sudanese government continues to obstruct the UN Mission in South Sudan (UNMISS) from carrying out its work, which includes protecting more than 200,000 civilians on six UN bases throughout the country.

The United States, UK, and Norway (Troika) are working with IGAD, the AU, and the UN to consolidate international efforts to call for a ceasefire on all sides, to deploy the Regional Protection Force,  and to develop a path toward truly inclusive dialogue.  The recent IGAD Summit produced a communique calling for these elements and we believe it is vitally important for IGAD to follow through on its commitments.

The United States will continue to promote accountability and justice in South Sudan by providing technical and financial assistance to the AU for the establishment of the Hybrid Court for South Sudan, to bring those most responsible for atrocities to justice, as well as supporting efforts to document atrocities committed during the conflict.

Continued political impasse in the Democratic Republic of Congo could spell trouble for the entire sub-region as it did during the 1998-2003 war, during which an estimated five million people died.  The risk of violence, particularly in the eastern DRC and the Kasais, is of deep concern, and numerous armed groups have committed mass atrocities.

On December 31 last year, the DRC government and opposition leaders reached a political agreement brokered by the Catholic Church that calls for presidential elections in 2017 and a transitional government in which President Kabila remains in power but appoints an opposition coalition prime minister.  While the agreement represents the best path forward, Kabila and the opposition have not implemented it in a timely manner and disagree on the prime minister that Kabila appointed unilaterally.

Further delays in the agreement’s implementation could put the DRC at risk of widespread violence.  Government repression was high in 2016 and the UN is also investigating allegations that the military killed unarmed civilians in the province of Kasai in February 2017.  The United States is working to make the UN’s Stabilization Mission in the Congo – MONUSCO – more effective in the wake of its mandate renewal.

Returning to Somalia, the country completed a peaceful presidential and parliamentary transition, pushed al-Shabaab out of most urban areas, and largely eradicated piracy.  Al-Shabaab, continues to be a serious threat, however, and an ISIS element is present in northern Somalia, but AMISOM continues to make progress by providing stability so that Somalia can build vital institutions.

The United States is helping in this regard by continuing to support AMISOM operations and developing Somali security forces that can take over from AMISOM, strengthening governance, providing food aid to stave off famine, and, eventually, promoting the return of indigenous economic viability.

The push for African led solutions must be supported by a funding mechanism that supports the long term sustainability of the organization.  Thus, we welcome the AU Assembly’s decision to increase member state funding of AU activities, including 25 percent of African Union led peace support operations by 2020.  President Trump has called for partners around the world to become more self-reliant, and I believe the AU’s proposed institutional and funding reforms support that vision.  We look forward to working with AU member states to identify appropriate means for greater self-financing.  But any resolution with this goal in mind must hold Member States accountable to their international obligations and commitments.  Ultimately, the United States remains encouraged by the prospect of more effective, self-sufficient, and African-led peace operations.  We understand, however, that additional progress will take time and look forward to continued deliberations on this topic at this year’s Summit.

As AU member states increase their financial commitment to the AU, they are also demanding greater transparency, accountability, and effectiveness from the organization.  The reform process begun under the auspices of Rwandan President Paul Kagame has the potential to make the AU more focused, more efficient, and more responsive to its member states.  While the final shape of the new AU is yet to be seen, we applaud the principle of reform and wish the AU well in pursuing those goals.

Before I close I wanted to turn my attention to this year’s AU theme, which is focused on developing African youth.  Half of all Africans are under the age of 20, and the continent’s population is projected to double to two billion by 2050.   A lack of opportunity can lead some youth to get discouraged, to become embittered, and begin to lose their biggest asset:  their hope.  And those youth, when they fall into that mindset, are susceptible to being drawn into terrorism and criminal activity, or, as we see in the news every day, to fleeing their homes for a precarious journey in a desperate attempt to make it to another part of the world.

Young people are, as a matter of fact, Africa’s biggest opportunity.  I have seen the incredible talent and drive of Africa’s youth through the Young African Leaders Initiative.  I continue to be optimistic about Africa’s future.

Where Africa ends up on the world stage by 2063 will depend on how well the continent tackles its own challenges.  It also depends on a strong U.S.-Africa relationship and continued engagement.  A U.S. foreign policy that advances America First for national security and economic prosperity doesn’t come at the expense of others.  The United States values our key partners like the African Union.  As Secretary of State Rex Tillerson noted, “our partnerships and our alliances are critical to our success.”  He also described Africa as a continent of enormous opportunity, and highlighted the commitment of the United States to partner with countries to fight terrorism, seek mutually beneficial economic opportunities, stabilize governments, and tackle health challenges.

I would like to conclude by reiterating that the United States remains a steadfast partner for Africa and continues to stand by the AU in its bold vision for sustainable peace and prosperity.