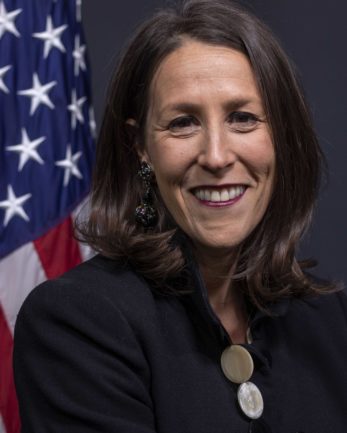 Jessica Lapenn was sworn-in as the U.S. Ambassador to the African Union and the U.S. Permanent Representative to the United Nations Economic Commission for Africa on August 27, 2019. A career minister of the Senior Foreign Service, she most recently served as the Chargé d’Affaires at U.S. Mission in South Africa from 2016-2019. Prior to this, she served as the Chief of Staff to the Under Secretary of State for Civilian Security, Democracy and Human Rights at the Department of State in Washington, D.C. She was Deputy Chief of Mission at the U.S. Embassy in Kigali from 2012-2014.

Ambassador Lapenn entered the U.S. Foreign Service in October 1994. Her overseas tours have included Jeddah, Riyadh, Paris, Tbilisi, Baghdad, and Jerusalem. In Jerusalem, she was the Chief of the Political Section at the U.S. Consulate General, and at the U.S. Embassy in Tbilisi, she was responsible for regional refugee assistance and policy in the South Caucuses and Central Asia.

She has completed several domestic U.S. assignments as well, including roles as staff for the Under Secretary for Political Affairs, desk officer for Libya and Tunisia, and director of the Office of Human Rights and Humanitarian Affairs in the Bureau of International Organizations. Ambassador Lapenn has served as an advisor on Security Council matters for the U.S. Delegation to the United Nations in New York and a State Department fellow at the U.S. House of Representatives.

Ambassador Lapenn was born and raised in New York City. She received a BA in Women’s Studies from Harvard College and an M.Phil in International Development from Cambridge University. She is the proud mother of a thirteen-year-old son.