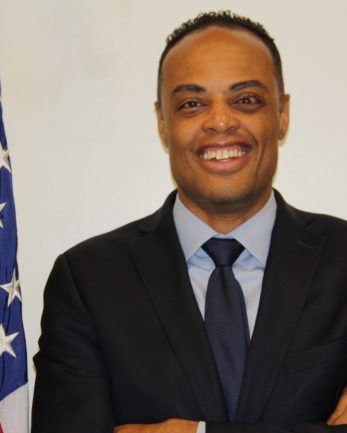 John Kelley currently serves as the Deputy Chief of Mission to the U.S. Mission to the African Union (USAU) and Deputy Permanent Representative to the United Nations Economic Commission for Africa (UNECA).  Prior to assuming this position, he served as Deputy Director in the Department of State Africa Bureau’s Economic and Regional Affairs Office, managing the Multilateral; Strategic Planning; and Democracy and Human Rights Units.  John spent three and half years in the Democratic Republic of Congo, first as the Eastern Congo Unit Chief, then as Economic Counselor.  In 2011, he was the Political Counselor in Juba, South Sudan, where he helped open the U.S. Embassy on the continent’s newest country.  Preceding that field experience, John spent five years serving in Washington, DC, first as the Senior Multilateral Officer in the Africa Bureau, and subsequently on the staff of the Deputy Secretary of State responsible for African Affairs and International Organizations, first for Deputy Secretary John Negroponte then briefly for Deputy Secretary Jim Steinberg.  His last domestic tour was in the Economic Bureau as the Senior Anti-corruption Adviser.  His first tour in the Foreign Service was in Yaoundé, Cameroon, as Political Officer, followed by Paris, France, where he was Special Assistant to the Ambassador then Vice Consul.  John holds a Master’s Degree in Public Policy from Harvard’s Kennedy School of Government, and graduated summa cum laude from Howard University’s School of Business.  He is from Washington, DC, speaks French, and has worked in the private sector and NGO arena prior to joining the Foreign Service.