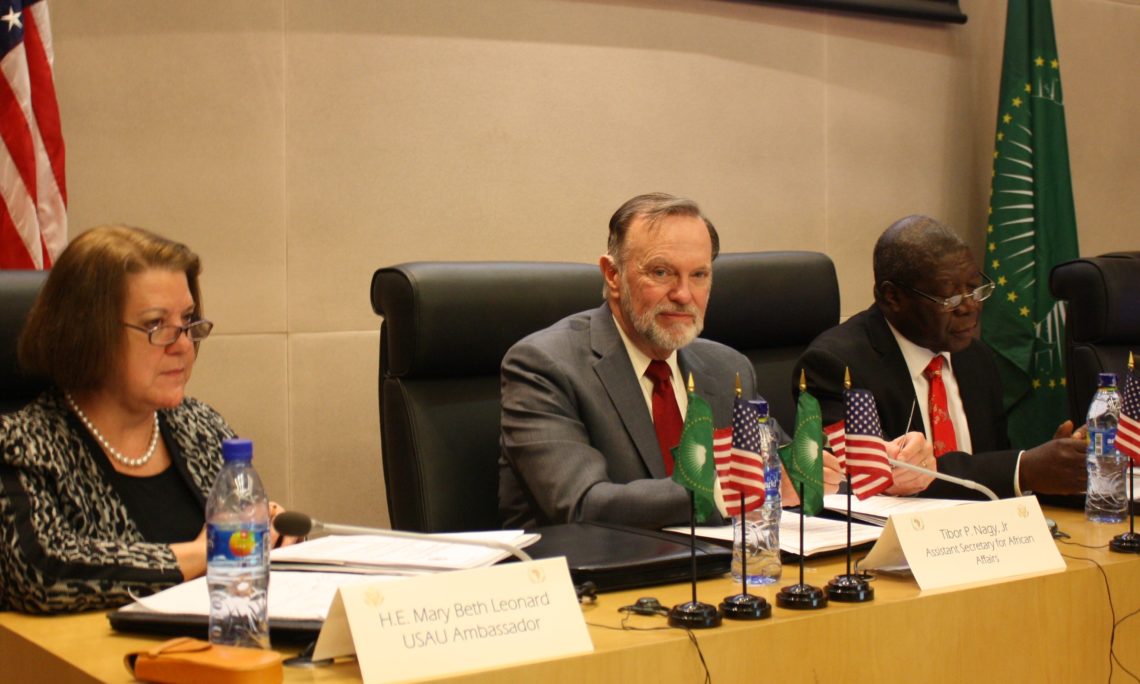 (As prepared for delivery)

Good morning everyone, and I am very pleased to be here in Addis today to join you for this important dialogue. I especially want to thank the African Union Commission’s Deputy Chairperson Quartey, and all the African Union commissioners and officials in attendance.

Although he is not here today, I would like to thank AU Commission Chairperson Faki for his dynamic and forward-looking leadership.

Today is the sixth annual United States-African Union High Level Dialogue, and December marks the 12th anniversary of the U.S. Mission to the African Union.

On this occasion, I am honored to address friends who believe as I do that Africa is a vibrant continent with all the home grown talent capable of transforming itself into a global economic powerhouse.

For too long our predecessors have focused almost entirely on containing security and humanitarian crises to the detriment of establishing well-formed plans for spurring economic progress and solidifying democratic gains.

While we still face significant security issues, and must remain vigilant to keep both Africans and Americans safe, today we must also plan for a more prosperous continent where young Africans will have jobs that keep them at home and will contribute to the development of a continent that will be the envy of the world.

The AU has a critical role to play in supporting this positive future for Africa. The world’s next great scientists, doctors, tycoons, and educators will hail from an AU member state.

U.S.-AU collaboration has been laying the groundwork for a stronger Africa for many years and has done so through a collaborative spirit and clear priorities. Our mutual interests are enshrined in four pillars, which are:

• Advancing peace and security across the continent

The first pillar, “promoting economic growth, trade, and investment,” is critical to Africa’s future success. This is one of my top priorities as well. The fact is that Africa is home to five of the world’s ten fastest-growing economies. By 2030, Africa will have a quarter of the world’s workforce and consumers.

A massive demographic change is coming between now and 2050, when Africa’s population will double to over 2 billion people and the percentage of Africans younger than 25 years of age will surpass 75 percent.

As former Ethiopian Prime Minister Meles Zenawi once told me, “If African governments don’t create opportunities for their youth, they will be washed away by them.”

We must begin now to create strong platforms in all AU states to encourage foreign investment that will result in good jobs and opportunities for their young people. We cannot wait.

The U.S. and Africa have made progress in expanding trade. In the first half of 2017, U.S. trade with Africa surpassed $18 billion, up 15.6 percent from the previous year.

While trade is growing, continued economic growth will depend on integrated markets and policies that facilitate trade and investment.

One clear sign of this Administration’s commitment to supporting Africa’s economic potential is the BUILD Act, which President Trump signed into law in October. This will initiate the International Development Finance Corporation (IDFC), which will double U.S. investment capacity to $60 billion. With more capital to invest, we hope to unlock Africa’s entrepreneurial spirit.

Also, progress made on the African Continental Free Trade Agreement is a game changer in how Africa’s trade partners now view the continent. We support the CFTA, and look forward to discussing how existing bilateral and regional trade relationships can advance this effort.

I personally would like to see the U.S. establish a Free Trade Agreement with an African nation, which will complement the CFTA.

Moving to pillar two, advancing peace and security across the continent. This pillar is critical to our ability to sustain opportunities and growth for all Africans.

The U.S. is working on all aspects of the Africa Peace and Security Architecture including maritime and border security and mitigating trafficking in arms, drugs, and wildlife.

We know that AU member states are leading the way, as over 60 percent of peacekeepers on the continent are Africans.

The U.S. is helping train and equip peacekeepers from over 20 African countries.

The AU and Member States have made real progress in stabilization operations.

We support the AU Mission in Somalia, the G5 Sahel Joint Force and Multi-National Joint Force Task Force and we urge the full endowment of the African Union Peace Fund.

The U.S. and AU recently concluded our second annual Countering Violent Extremism (CVE) Week. CVE Week brought nearly sixty African CVE practitioners together from over twenty countries to collaborate, share best practices, and build powerful partnerships. CVE Week itself built upon an innovative exchange program designed by USAU which sent nineteen CVE experts from across Africa – including five from the AU and regional bodies – to the United States for a 10-day program in July 2018.

By bringing together alumni of U.S. and AU-sponsored CVE initiatives, CVE Week built a formidable transcontinental network of like-minded individuals and organizations focused on defeating our shared scourge of violent extremism.

Our third pillar emphasizes the strong democratic institutions and good governance critical for stability and a sound investment climate.

We welcome the AU Commission’s ongoing support for free and fair elections, strengthening democratic institutions, and promoting human rights, goals that underpin U.S. engagement with the AU on this critical pillar.

Turning to pillar four, opportunity and development, including our focus on health security, the U.S. and the AU Commission have collaborated on several initiatives to address key socioeconomic and development challenges in Africa.

A prominent example is the establishment of the Africa Centers for Disease Control.

We also have partnership agreements on youth and inclusive workforce development; reducing maternal and infant mortality; and, advancing women’s empowerment and gender equality, including engaging women in peace and security initiatives.

Relatedly, women’s empowerment is essential to promote both economic prosperity and gender equality. November 25 – the International Day for the Elimination of Violence against Women – marked the official start of the 16 Days of Activism Against Gender-Based Violence.

So it is fitting that I would take this moment to commend Chairperson Faki and the African Union Commission for instituting a High-Level Committee to fully investigate allegations of sexual harassment against women working at the AU.

By resolving to reinforce its zero tolerance policy by investigating the claims and establishing a comprehensive sexual harassment policy that protects victims and punishes perpetrator, the AU is setting an example for all of Africa.

The United States is committed to promoting gender equality and advancing the status of women and girls around the world.

From PEPFAR to Power Africa, AGOA to Feed the Future to the Young African Leaders Initiative, the U.S. has stood with African nations to improve livelihoods, increase life expectancy, open our markets to African exports, promote democracy and human rights, and elevate Africa’s place in the world.

I thank all of you for your participation today and for your commitment towards prosperity and peace across Africa. May God bless all of you and your families.