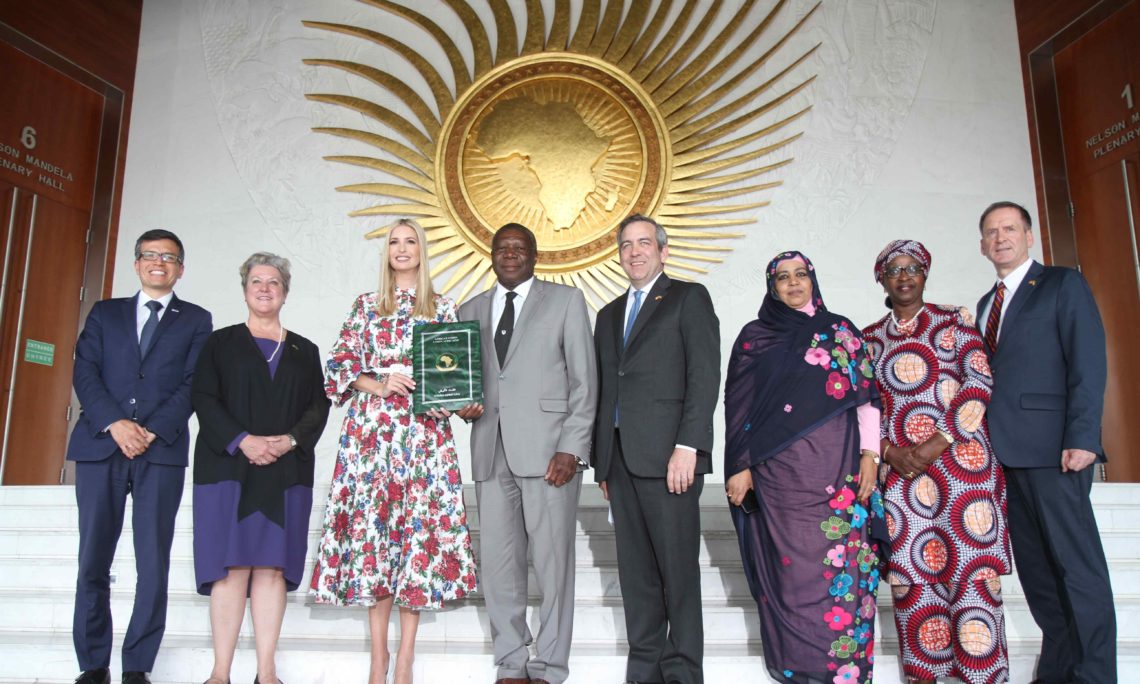 Group photo of U.S. and AUC delegation in front of golden seal at the AUC

Addis Ababa,15 April 2019: Amb. Kwesi Quartey, Deputy Chairperson of the African Union Commission (AUC), received Ivanka Trump, Advisor to the President of the United States of America (USA), at the African Union Headquarters in Addis Ababa, Ethiopia, to deepen the Strategic Dialogue between the African Union Commission and the United States. Also present at the meeting on the AUC side were Madam Amira Elfadil, Commissioner for Social Affairs, Ambassador Albert Muchanga, Commissioner for Trade and Industry and Madam Bineta Diop, AU Special Envoy on Women Peace and Security.  On the U.S. side were Mark Green, Administrator of the United States Agency for International Development (USAID), and David Bohigian, Acting Chief Executive Officer, Overseas Private Investment Corporation (OPIC).

Both sides expressed a commitment to strengthen the collaboration between the AUC and the U.S. within the existing Cooperation Framework as outlined in the 2018 High Level Dialogue held in Addis Ababa, on 29th November 2018.

The two high officials specifically reaffirmed the United States’ and the African Union’s unwavering commitment to advance women’s economic empowerment and entrepreneurship across the continent by promoting opportunities for women’s participation in the work force, increasing women’s access to finance, trade, employment, education, and skills development. The two also pledged to combat scourges including child and forced marriage, human trafficking, and sexual exploitation and abuse. Both sides further reaffirmed their commitment to shared values such as equality of opportunity, respect and promotion of women’s rights as well as ending all forms of gender-based violence and abuse in all spheres of life.

In this regard, the Deputy Chairperson briefed the U.S. delegation on ongoing AUC-led initiatives on Gender Equality and Women’s Economic Empowerment including the adoption of the first AU Strategy for Gender Equality and Women’s Empowerment (2018-2028), the Continental Results Framework for monitoring and reporting on the implementation of the AU’s Women, Peace and Security Agenda, the AU Funds for Women’s Economic Empowerment, and the AU Campaign to End Child Marriage as enshrined in the AU Agenda 2063 priorities. On its part, the U.S. delegation informed the AUC of the White House-led Women’s Global Development and Prosperity (W-GDP) Initiative aimed at empowering 50 million women across the developing world by 2025, and the OPIC 2X Africa Initiative which seeks to mobilize $1 billion in investment towards providing women in Africa access to finance, high-quality jobs, and critical services.

The AUC expressed appreciation to the United States for its various support including to the AUC Directorate for Women, Gender and Development, and the Office of the Chairperson’s Special Envoy for Women, Peace, and Security.

Recognizing the shared commitment to Gender Equality and Women Empowerment, the two high officials reaffirmed their willingness to promote effective laws, policies, and institutions, working closely together towards achieving those objectives.

Conscious of the quality of their collaboration, the AUC and the US agreed to work closely together to enhance their strategic partnership to advance Gender Equality, Women’s Rights, Women’s Economic Empowerment and Entrepreneurship continent-wide.