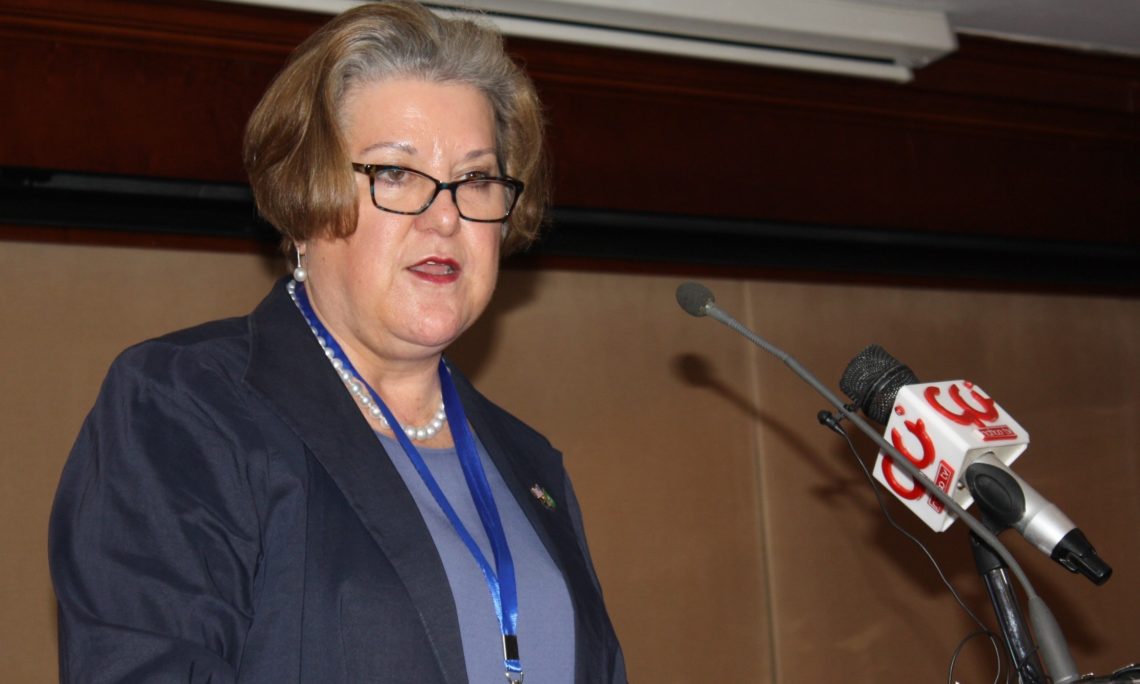 at the African Entrepreneur Forum

Good morning everyone!  For those of you who have traveled from across the continent, welcome to Addis Ababa – the diplomatic capital of Africa!

I cannot overstate how excited I am about this groundbreaking initiative, which serves as further evidence of the United States’ firm commitment to Africa’s young people.

Let me begin by thanking Dr. Eleni Gabre-Madhin and Blue Moon Ethiopia for partnering with us on this event – our first-ever African Entrepreneur Forum.  We share your vision for empowering Africa’s young people through entrepreneurship.  The young entrepreneurs in this room are chasing and achieving their dreams, starting companies that have the potential to transform Africa’s future.  I am deeply proud of USAU’s role in bringing them here from across Africa.  We are thrilled to be working with you to help them achieve their vision.  Thank you for all of your input and hard work in helping us put this together.

Reading Blue Moon’s statement of values, I was struck by how similar they are to those of our Young African Leaders Initiative, or YALI.

Both Blue Moon and YALI are dedicated to identifying, inspiring, and nurturing the most determined, disciplined, and purposeful leaders of tomorrow.

Both YALI and Blue Moon believe in servant leadership – entrepreneurs who understand that the best ideas serve and respect others, and aim to change their lives for the better.

There is so much hope and potential in this room.

The relationships that you will build over the next couple of days have the power to change not only your own lives, but entire communities, this continent, and our global community.

As I comment that you will build relationships here today, I think I have betrayed an “old school” way of thinking.

In fact, many of you have already met each other, through WhatsApp.  To someone like me – who was a young girl when Skype was merely a concept featured on hit sci-fi TV shows like Star Trek – you simply had to meet someone face to face to get to know them.

I marvel at the fact that today, by using technology that was little more than a concept just a short time ago, you have already begun the process to build durable relationships, strengthening the network that can propel you to the greatest heights.

Things are changing so fast, and entrepreneurs are in the driver’s seat.

Speaking of change, Africa has one of the highest concentrations of young people in the world.  We are all aware of the astonishing statistics about the overwhelming youthfulness of African populations even today, and that trend will only intensify as Africa’s population doubles to over 2 billion people by 2050.    We all want and need to harness positively this youthful creativity and energy.

The number of African youth entering Africa’s labor force each year between now and 2050 is astronomical, sometimes estimated at 10 million per year.  However, according to the 2017 African Economic Outlook co-published by the African Development Bank, OECD Development Center, and the United Nations Development Program, that number could be nearly three times higher – 29 million.

But it also presents an unprecedented challenge.

He recalled something former Ethiopian Prime Minister Meles Zenawi had once told him during his role as U.S. Ambassador to Ethiopia: “If African governments don’t create opportunities for their youth, they will be washed away by them.”

So I ask you: Where will all of these jobs and opportunities come from?

This is the most important question facing the future of Africa today.

How we answer that question will determine whether the 21st Century will be known as “Africa’s Century,” marked by peace, prosperity, and progress, or lamented as one of the greatest missed opportunities in recent memory.

The United States believes entrepreneurship is the key to unlock the African Union’s uplifting vision for the future of this continent, as articulated in Agenda 2063: “[a]n integrated, prosperous and peaceful Africa, driven by its own citizens and representing a dynamic force in the global arena.”

To help advance this vision, we have designed the first-ever African Entrepreneur Forum to dovetail with today’s closing of the 32nd African Union Summit and tomorrow’s U.S.-Africa Trade and Investment Forum.

Governments, large established corporations, and entrepreneurs all have critical roles to play in advancing this inspiring vision of Africa.

Turning to the role that established businesses will play in positively shaping Africa’s future, tomorrow’s U.S.-Africa Trade and Investment Forum will give us a space to engage on the future of U.S.-Africa trade.  We recognize that Africa is on the cusp of launching what will be the world’s largest trading bloc, with the African Continental Free Trade Agreement, or AfCFTA.

The United States supports regional economic integration, and we are eager to partner with Africa to increase growth and prosperity for Africa and for our common, global markets.

But, let’s be honest.

It is entrepreneurs – not governments, not large multinational corporations – who have the greatest ability to identify and address unmet needs, create employment, and give hope to Africa’s young people.

Entrepreneurs are the engine of growth all over the world.

The vast majority of most U.S. businesses, for example, employ fewer than 20 workers, and these small firms typify entrepreneurial endeavors.

That power of entrepreneurship is equally true in Africa.

According to the 2017 African Economic Outlook report I cited earlier, 22% of Africa’s working-age population are starting new businesses – the highest rate of any region in the world.

Small and medium enterprises (SMEs) – those with fewer than 20 employees and less than 5 years’ experience – now constitute the largest providers of formal sector jobs in sub-Saharan Africa.  These are the companies that are fueling growth.

Add in the fact that the average African entrepreneur is 31 years old, and the

connection between youth, entrepreneurship and Africa’s future could not be more clear.

Entrepreneurship also has enormous potential to empower women all across Africa.  According to data from a 2012 Survey of Business Owners in the United States, women were majority owners of 9.9 million businesses in the United States.  These firms generated $1.4 trillion in sales and employed over 8.4 million individuals.

Here in Africa, the connection between entrepreneurship and women’s empowerment is even more pronounced: African women are twice as likely to start a business than women anywhere else in the world.

We know there is a very strong correlation between women’s empowerment and peace.  When women are empowered economically, they invest in their families and communities, spurring economic growth and creating more stable societies.

I delve into these facts on women’s empowerment as a backdrop to convey our excitement that on February 7, President Trump signed a National Security Presidential Memorandum to launch the Women’s Global Development and Prosperity (W-GDP) Initiative.

Under the leadership of Advisor to the President Ivanka Trump, this historic initiative is a whole-of-government approach focused on advancing women’s full and free participation in the global economy.

The aim is to reach 50 million women across the developing world by 2025.  To achieve this ambitious goal, we will catalyze new partnerships around the world, with new programs in Africa.

This initiative has three pillars.  First, the W-GDP will help women prosper in the workforce by improving women’s access to quality education and skills training.  Secondly, it will work to identify and reduce the policy, legal, and regulatory barriers to women’s participation in the global economy and promote improved practices.

Most relevant for us here at the African Entrepreneur Forum, the W-GDP continues efforts to fund and support women’s entrepreneurship and access to capital, markets, technical assistance, and mentorship.

Women entrepreneurs are an emerging market force, serving as an important source of innovation and job creation.  We will continue to support women who want to start and scale their businesses, creating prosperity and stability for their families and communities.

Whether you are a young woman or a young man, it is you – Africa’s young entrepreneurs – who are the trailblazers.  It is you who have the most power to ensure that Africa lives up to its tremendous promise.

Nobody knows that promise – as well as the pitfalls – of doing business in Africa like the entrepreneurs and investors in this room.  I am so happy that you are here together to discuss the ways you can join forces to win the future.

I am particularly interested to hear your recommendations – what needs to happen in order to set the stage for an entrepreneurial explosion that will match the demographic one that is already underway?  What can the United States do to support you in this effort?

I look forward to the constructive feedback you provide today and the recommendations you will offer tomorrow morning at the Trade and Investment Forum.

I know you will all make the most of this opportunity.

I wish you a productive day, and look forward to meeting you tonight at our reception.

Thank you very much.